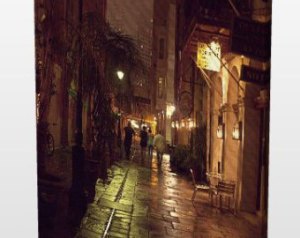 New Orleans has a history and reputation for many things Vampire.  At the heart of it all is the French Quarter which has seen it’s share of Vampire incidents since becoming home to Jacques de saint Germain hundreds of years ago.  As a matter of fact, many other members of the Vampire elite society have and still do find haven in New Orleans. Though it is a known fact to all locals, very little documentation may be found as we whisper the details of current activity only amongst ourselves.

The French Quarter has been haven to many Vampires throughout history.  A perfect setting as the area has always had a high rate of murder and missing persons.  The living are drawn to the area by its’ mystery and charm, eager to experience an encounter with the undead.  Few are lucky enough to return with their experiences, most have vanished without a trace leaving only a trail of whispered accounts amongst the locals.

One example of such a case happened in 1984.  Though, once again little documentation can be found (not surprising as many paranormal incidents are hidden from plain sight by New Orleans officials) the locals are very well aware of the incident.

Nine people were found in and about the French Quarter area, all having had their throats ripped out.  Paramedics and other first responders were dumbfounded as that though the scenes were gory, there was no blood to mention.  The case resembled an earlier occurrence where in 1933 two known prostitutes met the same demise.  A witness that lived above the scene said that he heard screams, as he ran to his balcony he saw a tall dark figure leaning over the victim.  The dark figure was reported to have leapt over a 12 foot wall at the end of the alley and disappeared with no trace.  The violence of both of the attacks would have left signs of a struggle and the bodies should have bled out.  But they did not, in fact the bodies in both cases were drained completely.  The cases remain unsolved to this day but the locals know the truth.

In the mid eighties a rogue vampire moved into the area making his home on Royal street, near to where St. Germain called home in the early 1900’s.  This Rogue vampire had caused so much turmoil in his brief stint in the city that New Orleans officials had began to pressure the known vampire elders in the community, who did not appreciate the invasion of their privacy.  Forced by the attention and suspicion that was cast upon them, the elders gathered and met in reference to the rogue vampire, all agreed that he should be eliminated.  And so it was, the rash of vampire attacks ended as quickly as it had began.

Now, everyone knows that it is against nature for vampire to kill vampire, however in this instance the greater good prevailed.  It is said that the slain trouble-maker was ripped apart by the elders during an ancient ritual, which no living man has ever witnessed.  After the ceremony the remains of the vampire were placed in a crypt at a nearby cemetery.  It is said by the locals that his screams and moans can be heard through the thick marble walls of the vault to this day.