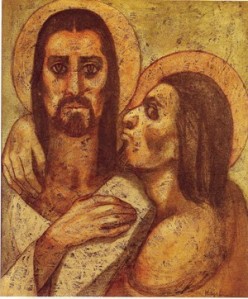 There is a legend amongst the Hebrew people that tags Judas, betrayer of
Christ, as the original vampire. We know from ancient texts that Vampires were present on the Earth prior to Jesus’ crucifixion, yet the legend is still quite intriguing.

The story can be found within the book of Matthew. Judas was an apostle of
Christ that betrayed Jesus with a kiss for thirty pieces of silver. When Christ was crucified Judas attempted to repent for his sin of betraying innocent blood and would return the silver to the priests and elders that had paid him. When the priests would not accept the return, Judas threw the silver upon the temple floor  and exited, intent on hanging himself.

The book of Agulah, written in the 843 A.D. by a catholic monk named Aed states that God punished Judas by restoring his life after he had hanged himself. Aed writes that God in his fury condemned Judas to walk the earth until the final days. Judas would fear the sun and be cursed to roam the land in darkness. Judas would never again know the comfort of death and would be damned to only feeding on the blood of living humans for eternity.

The legend of Judas established many iconic vampire traits which have been branded into the history of the vampire up to this day.

God cursed Judah with the ability to survive the light of day, though there are some legends that suggest otherwise.

The intolerance of silver – A physically painful reminder for vampires of Judas’ betrayal.

The fear of a crucifix – Another physically painful reminder, the result of Judas’ betrayal and the promise made by God to destroy Judas and his offspring upon the final hour of the final day.

Lastly – The thirst for blood as God placed the insatiable craving upon Judas to feed only from the living.

So what became of Judas? Very little was recorded of Judas and his activities after having been cursed by God. There are ramblings of a violent clan of vampires that existed in Serbia, Bulgaria and Romania for quite some time that were said to be the clan of the Iscariot’s. Judas was said to have had red hair, a rare find. The children of Judas were all said to carry the same trait, as did the members of the Iscariot clan. One legend says that the vampires of old, to include Lilith and Cain and the clan of the Iscariot’s had gathered into the city of Atlantis and were living beneath the temple at the time that the great city fell into the ocean. Many legends state that a vampire can not survive running water. Is
it possible that the vampires of old met their fate upon the sinking of Atlantis? Or perhaps they still remain frozen in time awaiting to be released……