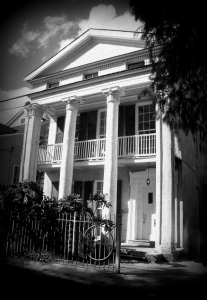 This beautiful home was erected in 1852 by Adam Griffin at what is now known as 1447 Constance street in New Orleans.  Griffin would only occupy the home for a matter of months before fleeing the area; The Federal army was on it’s way to New Orleans.

In 1862, New Orleans was under siege, the Union troops had been selecting and taking over large family estates in which to house their men and supplies.  The Griffin home would be one of the homes that fell into their hands.

During the Civil War occupation period, the Griffin house would be used as barracks and for storing of munitions, and this is where the haunted history begins!  The first of the soldiers to occupy the home reported hearing groans accompanied by the sound of clanging chains coming from the third floor, or attic.  Upon investigation, the rattled soldiers discovered several slaves that had been shackled to the walls, many in the advanced stages of starvation, some had already died.  The slaves were in such dire condition that many of them were plagued by maggots that had infested their woulds.  Those that could be saved were moved to a field hospital to be cared for.  Shortly after, the home became shelter to both soldiers and prisoners of war.

While still occupied by Union soldiers, two confederate deserters dressed in Union uniforms were caught looting in the area; a crime punishable by death.  When brought to the Griffin house, the deserters continued their ruse assuming that their punishment would be much more severe if they were tried as Union Soldiers.  They were so intent on convincing their captors that they would sing songs that were familiar to Union soldiers such as “John Brown’s Body”.  Some of the soldiers had been convinced and became sympathetic, supplying the two deserters with whiskey and other luxuries that were on hand.

When the deserters found out that there would be no leniency in their sentencing, they bribed a guard to smuggle in two pistols so that they may kill themselves before their sentence was passed.  The two of them lay across from each other in their beds, each of them facing the other as one shot the other in the heart.  It was reported that the deserters bled so profusely that their blood seeped through the floorboards and down the walls of the room beneath them.

After the War, the Griffin home was used commercially by several different owners.  Throughout the years, those that had been employed there had reported seeing two drunken soldiers, both holding bottles of whiskey as they sang “John Brown’s Body”.  There have also been reports having heard the sound of marching boots that accompany the singing voices.

In the early 1900’s the house was used as a perfume bottling company and then as a union hiring hall.  The next owner was a man who rebuilt air conditioners, he was said to have disappeared from the home without a trace.  During this period there were several reports of hearing the singing soldiers and marching boots.  There were also reports of screams and groaning accompanied by the sound of clanging chains coming from the attic.  Many passers by had reported seeing the two drunken soldiers staring out of the second floor window.

The home was especially active in and around 1936 while the Griffin house was being used as a lamp factory.  Several workers reported doors that opened on their own followed by the deafening sound of marching.  Others reported seeing and hearing the drunken soldiers as well as seeing blood seeping through the ceiling and walls of a second story room.

The new owners were nearly killed upon their initial inspection of their newly purchased investment.  A concrete block was thrown from the second floor as they stood at the base of the stairs.  Had they not seen the block coming at them they would have both been killed.  The kicker is that there are no such concrete blocks used in the construction of the home.  When the two startled investors went up stairs to investigate, they found that no one was there; all windows and doors were secured.

A few years later, after it had been deemed impossible to maintain commercial tenants, the home was converted into a boarding house.  One of the first tenants, a widow, would rent out a room on the second level.  One day while sewing near the window, she looked down to see a drop of blood on her arm.  Thinking that she must have scratched herself, she wiped the blood away.  Moments later it had reappeared, then another then another.  The widow looked up to see that blood was seeping through the ceiling and landing on her arm.  She immediately ran shrieking from the home and never returned.

In the 1970’s the neighborhood had become blighted, many of the once beautiful family estates had been overtaken by drug addicts and transients, the Griffin house would befall the same fate, but it would not last for long.  Even the addicts and transients were haunted while occupying the house.  Reports were made by some of them that they had witness 2 men in “some kind of police uniforms” singing  “old timey songs”.

In more recent years there have still been reports of having seen the two soldiers peering at the occupants from outside any given window on any given level.  There are also more recent reports of blood seeping through the ceiling and walls as well as the singing voices and marching boots.