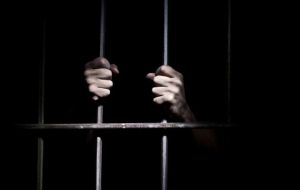 Many cultures have taken precautionary measures concerning the passing of those suspected to be vampire.  For thousands of years mankind has cast spells, installed talismans or amulets, prayed on and otherwise thrown the proverbial  “kitchen sink” at final resting places of those thought to be infected by vampire.  Any inkling of a suspicion would result in desperate, and might I add, futile attempts to entomb “infected” corpses beneath the earth, never again to rise in search of blood.

Proof can still be found in faded artwork within the ancient tombs of Egypt.  Many tombs have ancient spells which not only prevented the dead from rising but also insured that evil spirits could not penetrate tomb thus inhabiting the body that had been laid to rest within the tomb.  Within the archives of this blog you can find legends about Egyptian Vampire legends such as Menes and Sekhmet. 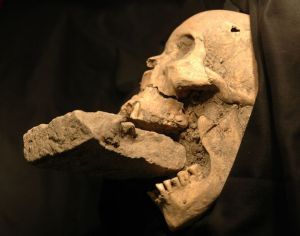 In Slavic cultures, corpses of the undead still lie beneath mounds of rubble, their mouths held agape by bricks, their bones pinned to the ground by stakes and spikes.  Burial rituals vary from region to region, evidence of such can still be found today.  Some of which has been preserved by man, some of which is presently being excavated.

Later in Victorian times, cages were installed over mortared grave sites, intent on  preventing the dead to rise.  Though an entirely explanation has been given to prevent panic within the public.  “Some” say that the cages were installed to prevent robbers from desecrating the graves and removing jewelry or other valuables that had been placed in the coffin with the deceased. 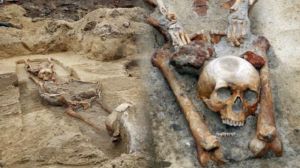 Those suspected, in some cultures, were not necessarily “bitten” by one of the undead.  Many believed that it was possible to become vampire after having passed violently, or by suicide.  Extreme measures were sometimes executed to insure that the deceased would not rise from their graves.  In some cases the head would be removed and placed face down between the feet of the corpse.  Many rituals included removing the heart, sometimes burning it, or the entire corpse.