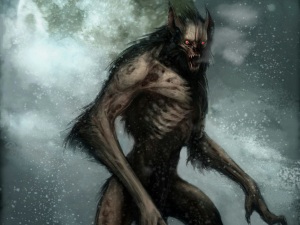 Here’s another Louisiana legend that varies from community to community.  As a matter of fact, there are nearly as many versions of the legend as there are variations in spelling the name, Rougarou.

This legend took root in Midieval French culture and was born into Louisiana when the first French Canadian immigrant settled among us.  To the French settlers, the tale was spun to keep children in line and out of the woods, especially at night.  To locals, well versed in the effects of VooDoo, the Rougarou became an even more fierce creature.  Said to stand between 7 and 8 feet in height, the beast has a human body but the head of a wolf, with razor sharp teeth and glaring red eyes.  Some believe that you must not look into the eyes of the Rougarou, lest you befall the curse and become one yourself!

There are several theories on how to become a Rougarou.  First, If you were to kill a Rougarou, you could become infected with the curse if you are exposed to its’ blood.  To further this belief, If one were to kill a Rougarou and witness the beast returned to its’ true form, he should not tell anyone of the encounter for 1 year and a day else he would see the same fate.  Other legends, no doubt put in place by the Catholic church, states that if one does not abide by the rules of Lent for seven years, he will become a Rougarou.  And yet another version of the legend says that a person who is turned into a Rougarou is cursed for 101 days, upon the last day the curse is passed to the first victim that the beast draws blood from.  The Rougarou will then permanently return to his human form, the victim will turn into a Rougarou at sunset that day.  Lastly, it is said that one can be cursed by a witch an become a Rougarou as well.

So, what do you do if you are turned into a Rougarou?  I’m glad you asked!  Legend states that you will retain your human form during daylight hours, though you will appear quite sickly to those around you.  At night you will prowl around the swamps and bayous of Louisiana, and sometimes within the city of New Orleans itself.  In these areas you most certainly would not be alone in your prowling however, you would likely be the only one searching for prey, human prey that is!  The Rougarou is said to have and insatiable hunger for blood and unfortunately, it seems to search out those that he knows in his human form to feed upon.

Though there are some parallels between the Rougarou, Vampires and Werewolves, the three are not the same.  The Werewolf has an intolerance for silver, the Vampire detests holy relics, garlic, silver and sunlight.  I have only found these references to talismans used to ward off the Rougarou; a man would place a leaf inside of his wallet, a woman would paint a hexagon beneath her bed.  I don’t know about you, but I find these two forms of protection a bit on the weak side for my liking!

So how would one defend himself against this beast?  Looks like to me, you would have to kill it!  So silver bullets are out and so is the good old stake through the heart approach.  Thank God the Legends are thorough!  Cajun Legends state that the Rougarou must be decapitated and his body mutilated or burned, to keep him dead!

So when and where was the last Rougarou spotted?  Well, it has been a very long time and there is no photographic evidence as found in the case of the Honey Island Swamp monster (sometimes claimed to be akin to the Rougarou).  However, let’s not write the creature off just yet!   Since the massive flooding brought about by hurricane Katrina, there have been reports of something large moving about in the swamps just beyond the suburbs of New Orleans.  Howls and screeching noises can be heard echoing through the bayous at night beneath the Louisiana moon!  Perhaps this is the resurgence of the Rougarou, warning the inhabitants of the suburbs to stay out of the swamps, especially at night!

One response to “Urban Legends of Louisiana – The Rougarou”