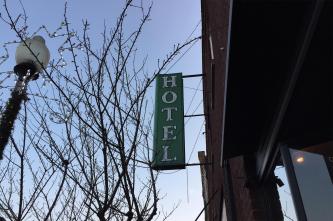 Alright so how about a haunted story from Kentucky?!  Yep, they have ghosts in Kentucky too, who would have thought!  So this is the story of the Anderson Hotel in Lawrenceburg Kentucky.  The Anderson has been closed down for decades; no room for the living there, cause the locals say that it’s packed full of ghosts.  Well, it’s not just the locals, apparently there’s a bunch of professional paranormal researchers that will tell you the same thing.  In fact, there is so much paranormal activity going on in this old hotel that not even the investigators are allowed back inside.

During a Season One filming of “Paranormal Lock Down” several of the film crew were attacked by, well, something.  On site, the team was able to photographically document bite and scratch marks on the torso’s of camera men and investigators alike.

So where did these malevolent spirits come from?  Well, apparently the Anderson wasn’t anything like the Hilton.  There is a dark and sordid history of drugs, prostitution, murder and at least 3 suicides, attached the the Anderson.  Imagine the fantastic vibes in this joint Ya’ll, it ain’t no Disneyland in this sucker!

Investigators have found and documented many areas in the Anderson that emit crazy high readings,  In this one room there is a mattress crammed in the corner, it’s stained with this dark rusty looking stuff, I would say likely blood right!  This room is believed to be one of the suicide sites.  The investigators that were last present in this room described some terribly disturbing events.  They claimed to have seem these horrific looking creatures in the room, they drug themselves across the floor.

In checking out the results of the investigation performed by “Week in Weird” I found more creepy details about the blood stained mattress.  These guys think that this is the same mattress where a young girl died after slitting her wrists open. They actually sprayed the mattress down with Luminol.  Guess what Ya’ll, that nasty looking stain, it was blood! Then these crazy bastards do something insane!  They pull the mattress back to the room where police reports said the body was found, and all Hell broke loose!  Members of the team were being slapped and bitten.  Others were having their hair pulled or being shoved by unseen hands.  Black shadowy creatures began drifting down the hallways, darting in and out of long since vacated rooms.

In another location, investigators from “Week in Weird” discovered a floor board with writing etched into it.  This board appears to be several decades old, the lettering that is etched into it does not seem to associate with any known alphabet.  Also inscribed in the board are ominous images of snake like creatures and the board appears to be spattered in blood.  These investigators are convinced that this board was used to open a porthole and allowed something dreadfully evil inside the Anderson.

When the doors were closed, in fact right after this investigation when the summoning board was found, the owner of the hotel brought the board to the investigators, with it came aggressive attacks.  Those that were near to the board were touched by freezing cold phantom hands, bitten and slapped.  Equipment wouldn’t work while in close proximity to the board,  Things would be thrown or moved across the room.  Eventually the board was housed with The traveling museum of paranormal and occult for safe keeping.

Though most of the spirits seemed to have latched hold of this place in the 1980’s, they definitely weren’t the first ghosts to homestead here.  Back in the late 1850’s a young couple lived here.  There had been a horrible steamboat accident and young Sarah was convinced that her husband had been killed.  Out of grief and despair she committed suicide, he husband hadn’t been involved in the crash and came home just a day or so afterward to find Sarah’s lifeless body.  Sarah is one of the more friendly ghosts, She’s seen often in old fashioned clothes and is known to leave dimes at the front counter, intended as a gratuity to management for running the establishment so well.

Publisher page to purchase The Adrian Trilogy as a 3-Volume Set or separately, “To Be His Soulmate,” “Adrian’s Fury,” and “Adrian’s Legacy.”

My website to purchase: “Short and Gory” and “Wicked Truth.”