These “mass ossuaries” were created in the 18th century as a response to the overwhelming outbreak of plague.  The State Council ordered all bones to be excavated from Paris cemeteries in order to relocate them underground within the limestone caverns beneath the city.  The process began in 1786 and continued throughout 1814.  The Catacombs are home to over 6 million bodies and as legend would have it, an occasional vampire clan.  What more perfect surroundings for an elder as many of the bodies are affixed in ornate fashions; creating a breathtaking tapestry of death!

Open by appointment only, a party of 10 may be guided through the museum.  Crammed with artifacts and all other manner of objects related to vampire legends, owner Jaques Sirgent has a vast knowledge of Vampire history and will answer the darkest of vampire queries that can be conjured. 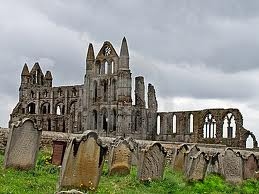 The 13th century ruins of the Whitby Abbey were the backdrop for Bram Stoker’s, “Dracula” and for that there is a reason.  In 1885 a Russian Schooner, The Demeter war run aground by a wild storm in Whitby harbor; the entire crew including the captain were found dead.  The instant that the Demeter had run aground, a large black dog was seen running toward the Abbey.  The dog, a form that the vampire can take on at will, brought ill fate onto the Abbey as several of the staff became unaccounted for in the following days; and Bram Stoker’s Dracula was born!

Bran Castle is widely believed to be the home of Vlad the Impaler, or as Stoker referred to as “King Dracula”.  Vlad, needing no further introduction to a Vampire fanatic, has left a large imprint on the Romanian countryside.  For further details into Vlad’s bloody reign both living and undead, search my past blogs for “What I didn’t know about Vlad Tepes”.

A place near and dear to me!  This tourism hot spot has been known as haven to Vampires since the first cobblestone streets were laid.  The Vampire culture is still quite prevalent throughout the New Orleans area.  Many legends still exist, and recent rumors still circulate amongst the locals.  For a deeper look into some of New Orleans most famous Vampire legends search my past blogs for “New Orleans”.

Amongst the beloved and elite of New Orleans lies the crypt of a Vampire, only a handful of the locals can identify the correct plot where he lies.  I believe that this vampire is named in one of my past blogs on new Orleans vampire legends, but that is strictly my opinion (wink, wink!).  Though the permanent residents of Lafayette Cemetery are quite dead, locals say that the sometimes gaping tombs offer haven to vampires from time to time.